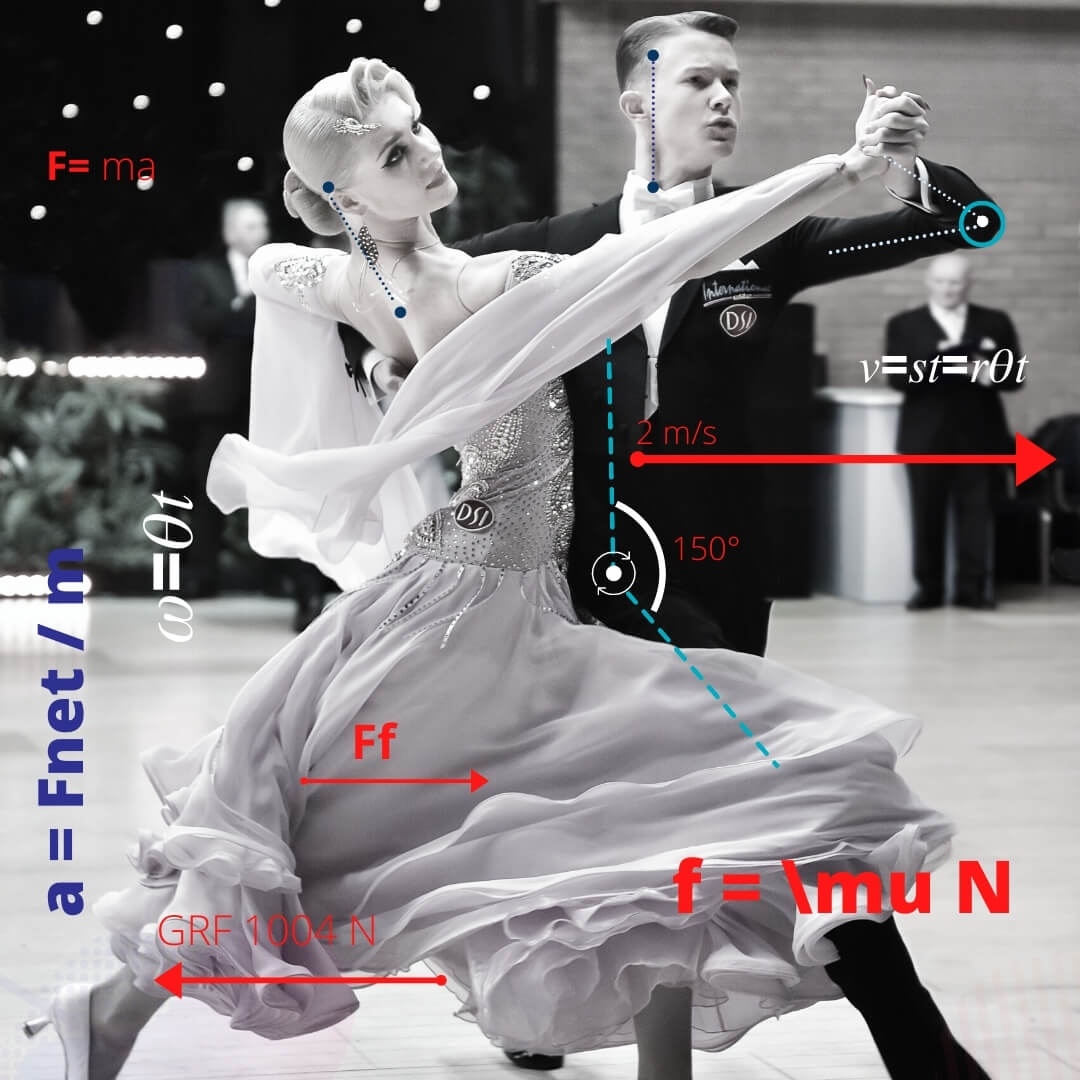 Published in
Coaching
on
October 1, 2020
What is Balance? How to maintain it through linear and angular momentum? Is Distance the same as Displacement? How does speed relate to velocity, and how it can make you a better dancer?

In Biomechanics in Dance Part 1, we covered the basics of Biomechanics and Isaac Newton's Laws of Motion. This article will dive into more complex subjects that are derived from the Laws of Motion. If you haven't read the first article, I would highly recommend starting with it.

Balance is the ability of a dancer to control their body equilibrium or stability. Balance is often a byproduct of good alignment in the body. There are two types of balance- static and dynamic. A good understanding of both are needed to perform efficiently and to prevent injury.

Example: Imagine you are dancing a Natural Spin Turn. The step calls for a nice weightless hovering action on Step 5, right before lowering. The moment is challenging since both partners are up on their toes (releve) and finishing the rotation simultaneously. Having a good dynamic alignment and bringing the center of weight over the base of support (in this case, the R ball of foot for Lead and L ball of foot for Follow) are crucial for succeeding in the Natural Spin turn and producing a nice and balanced movement.

Momentum can be transferred from one object to another. There are different types of momentum, which each have a different impact on dance.

Example: The first step of a Feather Step for the Lead is described in the technique book as a RF Forward taken down the Line of dance. By executing this step correctly, according to the book, we would create a linear momentum that is moving Down the Line of Dance.

Angular momentum is the rotational equivalent of linear momentum and is created by the rotations of various body segments e.g., the rotation of the shoulder plane when performing a Feather step aiding in the stepping outside partner. It is important to understand that most of the angular momentum in Ballroom Dance is preceded by a linear momentum being transformed into angular movement. This symbiosis between the two creates a distinctive curvilinear movement pattern in dances like Foxtrot, where the turning actions are spread over a number of steps creating a very smooth turning action. 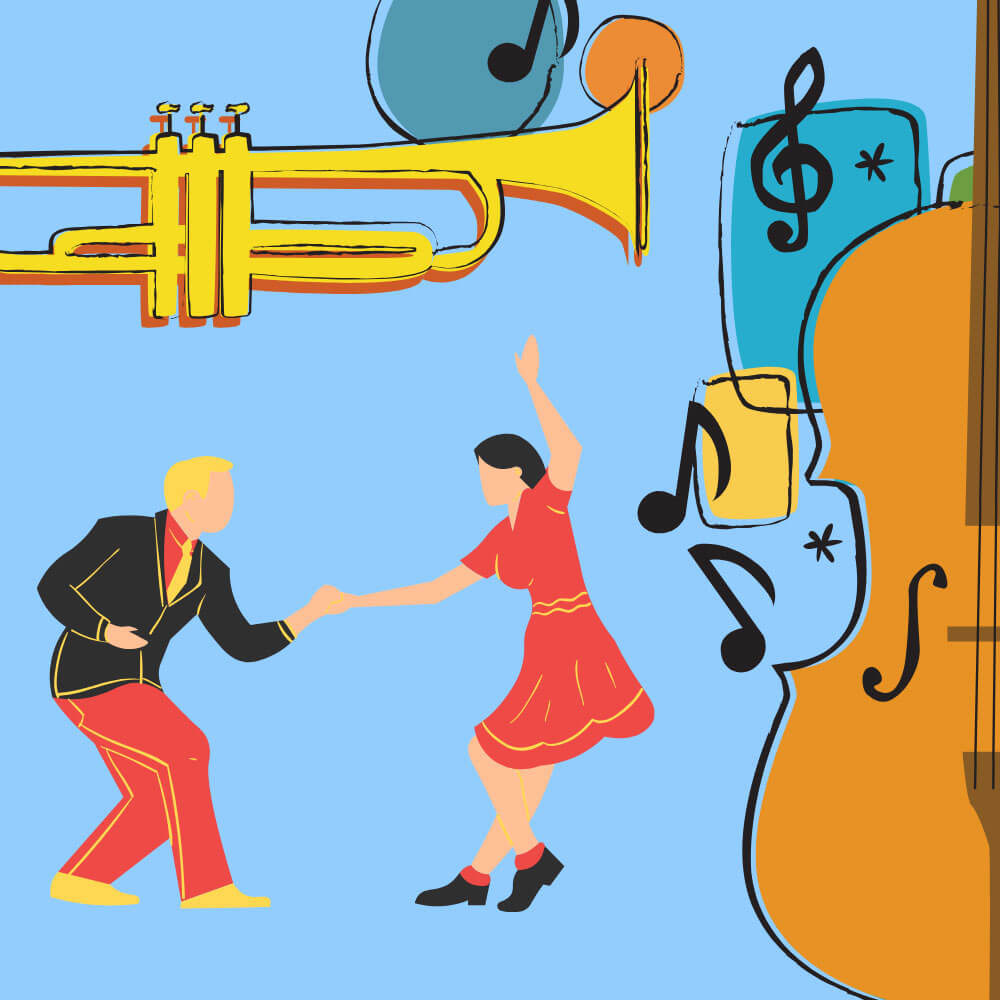 In the previous article, we look at the forces that apply to a dancer's body and how we can use them to describe how a dancer can move around in space. To describe the movement of the body stimulated by the forces, we can use Position and Displacement concepts.

Simply said, displacement is the difference between position one and position two; let's say 4 feet. We can say that Victor and Anastasia have displaced their bodies from P1 to P2 4ft in length. The term distance is often used to describe displacement, but they are not precisely interchangeable since displacement always has direction. In this case, Victor has displaced 4ft to the LEFT.

Since the distance doesn't have direction, we can say that the arch on the picture represents the distance traveled from P1 to P2- it might be 5-6ft.

Displaced by 4ft to the LEFT.

Dance is often referred to as a movement through space and time with Energy. These Space, Time, and Energy concepts are directly related to Velocity, which is considered the first derivative of displacement. Confusing? Let’s untangle the mystery.

Remember, displacement deals with space- Victor has displaced 4ft to the right. Velocity, on the other hand, needs the factor of time to be accounted for.

Victor’s displacement from the example above was 4ft to the right. That is the space the dancer has moved through. If we measure the time that it took Victor and Anastasia to displace their bodies from P1 to P2, let’s say it took them 1s; we would be able to determine Velocity.

This sounds very similar to the bike computer that tells you how fast you are riding. For example, 22m/h. But there is one difference. Speed is to Velocity as Distance is to Displacement. Speed does not have a direction, whereas Velocity has a direction- Victor’s Velocity is 4ft/s to the Left.

The concept of Energy

If a dancer is moving and has a velocity, it immediately means it has Energy. For the dancer to be moving around in space, he has to have Energy in the body. Now that Energy comes from a force that is applied to the object either internal (muscle force) or external (your partner’s influence).

Acceleration is the second derivative of Displacement. It describes the movement of the body through space and provides this connection between movement and force. Pushing the car's accelerator makes the engine use energy and makes the car's speedometer increase, giving the car some velocity. The energy that the car is using is producing force.

We can simplify the process like this- Acceleration—> Energy—> Force—> Velocity

Let's have a look at Victor and Anastasia's picture again. For them to jump up we know that they have to produce a ground reaction force by pushing down to the ground. This causes an acceleration up, which means that we have a velocity. However, everything that goes up must eventually come down because we have the force of gravity, causing acceleration down.

The second that Victor produces his forced and the ground reaction force has pushed him up off the stage; gravity starts to act to accelerate him back down, which means that the velocity will slow down. At the top of the jump, the couple will have 0 velocity, therefore, starting to come down to the floor.

As mentioned above, correct biomechanics provide efficient movement and may reduce the risk of injury. In dance and any other sport, it is always good to consider abnormal or faulty biomechanics as a possible cause of injury. These abnormal biomechanics can be due to anatomical or functional abnormalities. Anatomical abnormalities such as leg length discrepancies cannot be changed, but the secondary effects can be addressed, such as a shoe build-up or orthotics. Functional abnormalities that can occur can be muscle imbalances after a long period of immobilization. For example, broken limbs can take a long time to recover, and the body can start building mechanisms to adjust for the new "reality" and cause the body to move irregularly.

In biomechanics, the different planes of motion and axes are often referred to. Have a look at this video to become familiar and imagine how you can use them in dance.

Incorrect technique can cause abnormal biomechanics, which can lead to injuries. Below are just a few examples of the relationship between faulty technique and associated injuries.

Biomechanics is an incredibly complex topic. The laws, concepts, and principles we have covered are the core basics of it. Every sport discipline has a lot of studies conducted on the biomechanics to perfect and tune the technique for the most efficient, powerful, and injury-free movement. Read and understand the basics, then try to discover for yourself how all of those principles apply to a particular movement. It is fun and can make you a better dancer.  Happy Dancing!