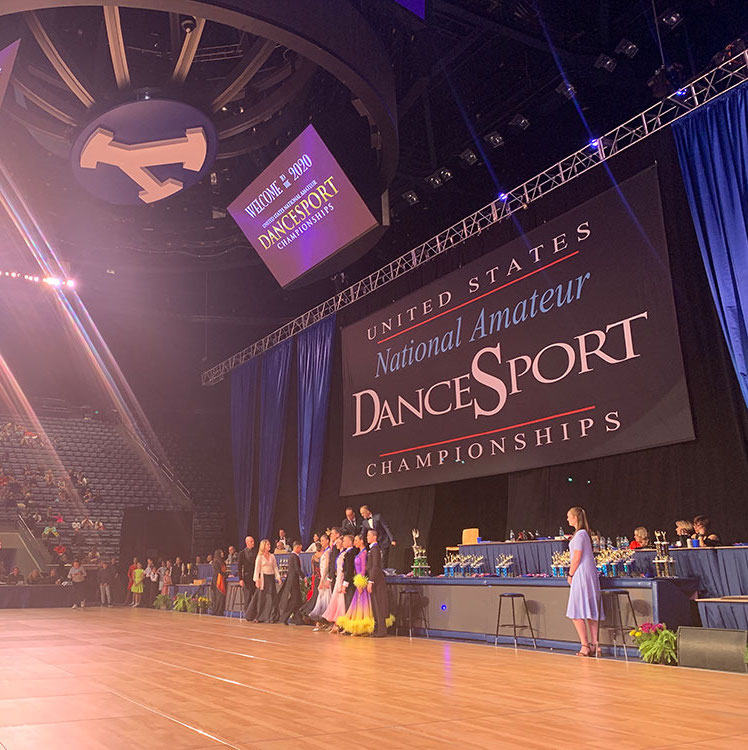 Published in
Ballroom Dance
on
March 16, 2020
Amid a world crisis, an invisible threat put an end to the most anticipated competition for all Amateurs. Covid-19 sent hundreds of dancers home, shattering their dreams of fighting for the highest title in the country as U.S National Amateur Dancesport Championships got canceled.

Every year our U.S National Amateur Championships are held in the magnificent BYU Marriot Center in Provo, Utah. This year was no different. But something else was. Amid a world crisis, an invisible threat put an end to the most anticipated competition for all Amateurs- its name- Covid-19 (coronavirus).

This micro villain sent hundreds of dancers home, shattering their dreams of fighting for the highest title in the country as U.S National Amateur Dancesport Championships got canceled.

In late December, a new threat started endangering the lives of hundreds of people in Wuhan, China. An invisible killer, disguised as the flu, was on the loose, and it was spreading fast. The world is so interconnected now that the matter of spreading was not the real question. How quickly was what concerned everyone.

January 19th marked the date of the first case in the US of Coronavirus. Not far from us in Snohomish County, Washington. The exposure and risk of contracting the infection were growing, but even by the end of February, there was no real talk of a national crisis or specific measures taken. Everyone went about their business, and we continued preparing for Nationals.

Upon arriving in Utah on Wednesday night, we heard the breaking news of the travel ban President Trump imposed on trips from Europe to the United States. We knew that something serious is coming. Discussions about how this affects our business and the possibility of not traveling to Blackpool Dance Festival this year occupied my fellow teachers and me through dinner. We didn't have a clue what was about to happen just 15 hours later.

Thursday, 8 am. The competition has started. Everything at the Marriott Center was going beautifully. A day full of dancing. Beginning with the Amateur Pre-Championship Smooth, following with Syllabus events and Adult Novice Ballroom. The culmination was scheduled for the evening session- The U.S. National Amateur Smooth Championships.  So many great dancers from all over the country gathered for one reason- the love of dance. Inspiring.

Out there, seemingly in a parallel reality, the silent threat proved us all wrong. It was spreading faster, out of control. As more and more people started to get confirmed with the contagious disease, the government had to step in and take measures to prevent a total pandemic.

As I was waiting for the Amateur Pre-Championship Latin event to start, Curt Holman, the director of the Ballroom program at BYU, stood on the podium and made the announcement that, unfortunately, the National Championships has to be canceled.

That meant that no events will be danced on Friday and Saturday, and we won't have our National Champions in many categories, including Amateur Ballroom and Latin. The organizers were forced to make the hard decision after Utah Gov. Gary Herbert announced that for at least the next two weeks, he will limit mass gatherings of groups in Utah to no more than 100 people.

The whole stadium erupted, and then it sank into silence. I was left speechless.

Anticipation was the one feeling that dominated our hearts in the months preceding Nationals. We all as teachers, coaches, parents worked all year tirelessly to bring our students and kids closer to their dreams and hopes of becoming the new U.S. National Champions. Sadly, in the midst of a world crisis this year, those long-awaited four days of the year have been taken away from us. Disappointment is the only word that can adequately describe what all of us feel inside, including my fellow teachers, the parents of our kids, and myself. 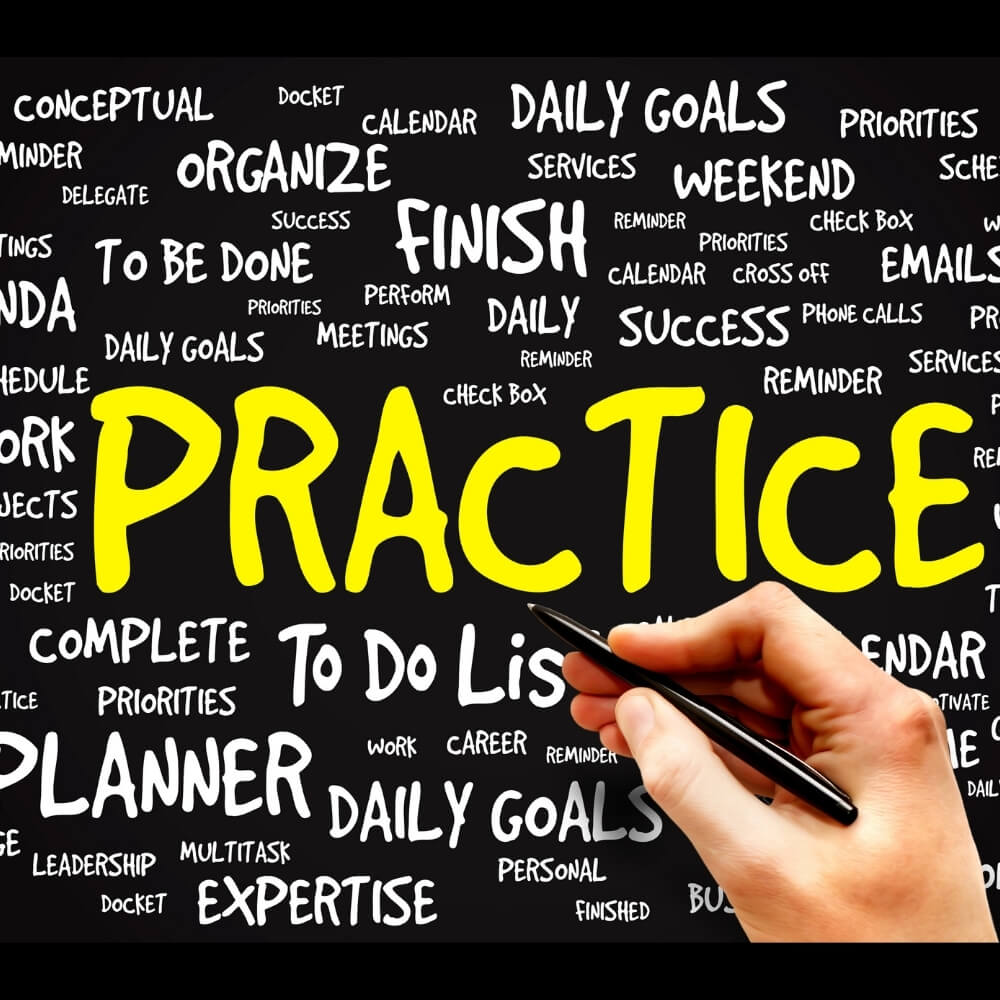 Ballroom Dance
·
March 16, 2020
The Importance of Deliberate Practice in Dance- The Psychology of Performance
by
Atanas G. Malamov

Minutes after the announcement, the next event started. Everyone was in shock. I was trying to make phone calls and notify some of our parents and couples who have just landed in Salt Lake City airport.  I could hardly focus on the first round, where I had 4 couples competing. I was there but not fully present.

On the other hand, news about the possibility of Washington state being put on lockdown was circulating in the air. My friends were discussing an evacuation plan while I received the news about the cancellation of my next two competitions- The Royal Ball and Ballroom Beach Bash. Things were serious.

The background noise in the ballroom reminded me of a beehive- highly technological one, as cell phones were ringing right and left around me. There was a massive crowd of impatient, furious parents, and teachers gathered on the organizer's table. Oh, what a nightmare, I thought.  I felt bad for Lee Wakefield and Curt Holman, who put their best faces, met and listened to everyone's concerns.

New development caused the real stir of emotions, especially online. The culprit- a message that popped up on the screen over the stage, which showed that there will be some events run tonight after 9:30pm. We were told that the parents demanded that those events are run since the kids are already there.

But only moments later, there was a new message which said that those previously announced events will be regular Championships but will NOT have the prestige of a U.S National Title. A great decision made by the organizers to give everyone a chance to dance since some competitors were already in Utah.

It was too late. I opened Facebook, and things have exploded. Angry and hurtful comments from parents and teachers, accusing NDCA of taking their kids' the chance to compete for the national title, were just the beginning.

Blames against the NDCA and BYU for not canceling the event earlier was fueling the online discussions.  But then they would have protested against the cancellation. No one wanted to hear about the most current decisions of moving the balance of the competition to a new date in November so that everyone has a chance to compete for the prestigious trophy.

On the other side, everyone in the ballroom was pleased with the arrangements made and was getting ready for a night full of dancing youngsters. No one was dwelling on what should, could, or must have happened. Everyone was looking ahead.

The boy from one of our junior couples has already made arrangements to go back to Seattle that night. As they were sitting at the gate to board their flight home, I called them and asked them if they can change their flights for tomorrow and come to Provo and dance tonight's events. They said yes, and they were ecstatic, the boy was so happy that he would be able to dance tonight.

We Come Together in Times of Struggle

As the Pre-Championship Latin event was coming to an end, the evening session was about to begin. Things in the ballroom were starting to settle.  The sliver of light at the end of that emotional tunnel was growing. We were about to choose the new U.S National Amateur Smooth champions. The evening panel of judges stepped in as the event was starting.

Mark Brock (MC) and Gary Mcdonald stepped on the stage and announced that they were going to MC the whole night together. We were in for a change of mood. The best MCs in the country times two.

Gary and Mark acknowledged how unprecedented and unpleasant the whole situation is for everyone but made sure to emphasize that we will have fun tonight before we were sent home. The ballroom erupted once more- this time in cheers and uplifted spirits. I've been in the stadium for about twelve hours- this felt energizing, exciting.

Event after event, the night was getting better. This was my 6th time attending National Championships, and I've not experienced such an electric atmosphere before. It was getting late, but the organizers were committed to giving everyone a chance to dance. The quality of dancing from Amateurs all the way down to Pre-teens was out of this world. But more so- the passion and love, real love for our craft that was left on the floor. Admirations for all competitors.

Samba marked the beginning of a tough time for a little pre-teen couple, the scene unfolded before my eyes. The boy started crying, seemingly having trouble to breathe well after the Samba. One can tell he was really thinking about leaving the floor, he didn’t. He cried through the whole Rumba; his partner was worried, so she cried too. The Paso Doble and Jive wiped the tears away, they finished the final. The dancing- so beautiful, elegant, and yet strong. I have never seen so much love and determination. I was in tears.

Raised hands with flickering cellphone lights accompanied the tunes of the Viennese Waltz every round. A tradition in Utah. The audience was amazing, really made all competitors feel special.

Having said all that and considering the situation was out of the hands of organizers, In my view, it has been handled with utmost PROFESSIONALISM and RESPECT for everyone that we could possibly hope for.

Lee and Linda Wakefield, Curt Holman, and all NDCA representatives, judges, MCs, music directors, volunteers have worked tirelessly from 7 am to 3 am, under extreme pressure and unprecedented circumstances. They deliver a fantastic event where everyone could share and enjoy the love of DANCE.

Thank you guys, you turned an unfortunate situation into a beautiful, fun, energetic, exemplary for everyone event.

To all the kids, especially Pre- Teen, Juniors, and Youth who danced so late, yet so beautiful, you guys delivered art and sportsmanship on another level through sweat and tears on that floor. Respect for all of you!

Spectators! Thank you for your continuous support and for creating a fine atmosphere for the dancers in a difficult time.

To everyone, I have one message- be rational, not emotional, and respectful to everyone in an unprecedented situation. Look beyond yourself; we all need to move forward and find how to enjoy life in a time of crisis.